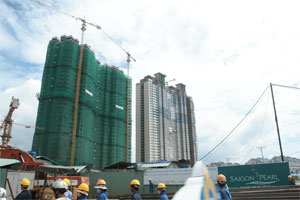 Ho Chi Minh City Construction Department has just done with draft instructions on the safe use of tower cranes in construction sites within the city.

The horizontal jibs of tower cranes in a construction site rise above a street threaten lives of the passers-by (Photo: Minh Tri)

Tower cranes are the best choice for the construction of tall buildings in Ho Chi Minh City these days due to their high structures, long jibs (working arms) and amazing lifting capacity.

These advantages, however, turn out to be potential danger to the nearby inhabitants and passers-by when the fatal flaws arise or the atrocious weather set in.

Many tragic incidents related to tower cranes’ toppling and rupture actually took place in the city caused lots of heartbreaking deaths and injuries.

The accidents result from the builders’ unawareness of safety in construction and the government’s loose control over careless use of tower cranes, according a leader of Construction Department.

In order to stop the happening matter, the city’s Construction Department has just proposed to the local People’s Committee draft instructions on the safe use of tower cranes within the city.

If the proposal is upheld, the conditions, usages, operations, managements and supervisions will be put into a strict consideration.

The draft instructions particularly stated that the tower cranes with horizontal jibs will be banned in the construction sites within the city from Jun 1 next year.

The cranes with structures inappropriate to the construction areas or security for the workers, building devices and especially the surrounding habitat are also supposed to be eliminated.

The owners of unsuitable cranes used before the official instructions are enforced must send their building project to the city’s Department of Labour – Invalids and Social Affairs by the end of March next year.

They will be totally responsible for local security pending the authority’s agreement.

The tower cranes need registering at the Department of Labour – Invalids and Social Affairs before operating. This department itself should look at suggestions from the related government agencies before licensing the tower cranes’ operations.

The builders must have security guarantee and technical instructions on installation, operation, removal of the cranes provided by the manufacturers and their own records on the technical process.

Any crane is temporarily put on hold in a month or due to bad weather should be entirely checked from the details to their functions.

The workers who participate in the installation and removal or operation of the cranes are expected to be thoroughly trained and experienced.

The Construction Department also pays much attention on the working conditions of the tower cranes.

In the instructions, the builders are advised to have detailed plans on the running schedule of the cranes, the dangerous area when the cranes are working, information of its management, and especially the concrete traffic and evacuation directions when incidents occur.

In order to enhance the safety, the draft instructions also clearly stated the responsibilities of not only the builders but also the local government and related organizations for certain building constructions using tower cranes.

“The instructions don’t aim at raising objections to the constructions but protect lives and assets of workers, inhabitants and passers-by from the impending danger of tower cranes,” said Nguyen Van Hiep, Deputy Manager of Construction Department. 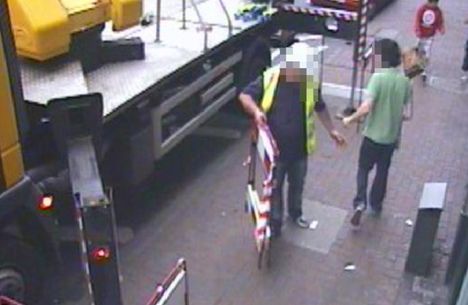