﻿﻿The dragon has left the station.

Early Monday morning, Eagle West Cranes was on metal sculptor Kevin Stone’s front lawn preparing to transport his 8,000-pound steel dragon to the Pacific National Exhibition grounds in Vancouver.“I don’t want nothing to go wrong,” he said, swiping his hand nervously through his hair. “A million things could go wrong.”﻿﻿ 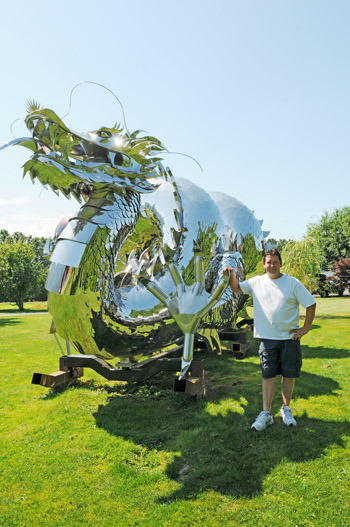 Chilliwack’s iconic steel dragon is leaving town.  Kevin will be showcasing his Imperial Water Dragon at the Pacific National Exhibition (PNE) in Vancouver later this month.  He hopes not to get it back. “I hope to sell it … I hope it will stay in Vancouver and become a community piece,” he said.

The experience had Stone a flutter of nerves.

The top-heavy dragon could flip during lift off, or get damaged from flying debris on the highway, or if measurements weren’t accurate, the 12-foot tall dragon could meet its demise in the underbelly of an overpass.  “A lot of unforeseen events could happen,” said Stone, sure his nerves wouldn’t settle until the dragon was on-site, unharmed.

The stress, he said, comes with the territory.

“This is the whole point of making these [sculptures] – for them to be on public display.”

The PNE commissioned the Imperial Water Dragon as a showcase piece for its container art program, a fortress of stacked shipping containers where local multi-disciplinary art is featured.

Laura Ballance, PNE spokesperson, told The Progress earlier this month that as soon as organizers saw the dragon, they knew it would be a show stopper.

Getting it to the PNE grounds, however, was the challenge.

A route had to be designed and approved by the Ministry of Transportation, and pre-driven to ensure there would be no mishaps with power lines or bridges. It couldn’t go straight down Highway 1, as the load was too wide to clear the construction zones. Instead, it had to divert onto the Abbotsford-Mission Highway, then onto the Lougheed Highway from there.

Going just under 60 kilometres an hour, the trip was estimated to take three hours.

“It’s going to be quite the spectacle,” said Stone, who planned to drive behind the dragon the entire route. “A lot of honking for sure.”

The most stressful for Stone was getting it onto the flatbed trailer.

A 120-tonne crane was used, with six straps attached to the metal platform of the dragon. As the crane lifted, the giant pearl in the dragon’s hand began to quake, and the platform’s steel beams started bending upwards. Stone said that was to be expected, but feared the beams would snap.

Like a protective parent, he feared many other aspects of the process. He feared the metal chains of the crane would come in contact with the stainless steel dragon, which would not only scratch the dragon, but also impregnate it with rust. He feared the dragon wouldn’t clear the trees on the side of his driveway, and before the trailer could leave, he got his son to saw off large branches on one tree, and used rope to pull back the branches on another. He feared the dragon wasn’t secure enough on the trailer and offered wood blocks and braces to the Eagle West operators.

“We’ve lifted lots of interesting things, but never a dragon,” he laughed.

Wittenberg, the driver and crane operator all had their cameras out snapping pictures.

“Hopefully we won’t be doing that again,” said Stone, once the dragon was secure and ready for transport. “I don’t want to see it come back here. It would be nice to see it finally in a public venue … hopefully this exposure [at the PNE] will create interest.”

The dragon will be located in Spirit Plaza at the PNE. The PNE runs from Aug. 20 to Sept. 5.

Given the success of other artists showcased at the PNE, Stone could very well get his wish granted.

PNE organizers came across Stone’s website earlier this year and after making a trip to his Metal Animation Studio on Upper Prairie Road, they felt the dragon was perfect for the annual fair.

“It was just spectacular,” said Laura Ballance, PNE spokesperson. “If we get an opportunity to bring in a piece as magnificent as the one from this local artist, we will. We think it’s going to be something really different … a big hit.”

The dragon will be located in Spirit Plaza and will be featured in the middle of the container art program, a fortress of stacked shipping containers where local multi-disciplinary art is showcased.

PNE organizers believe it will be a show stopper.

The mirror-polished, stainless-steel dragon, built in 2009, is 12-feet tall, 35-feet long coiled – 85-feet uncoiled. Within the creation, the nine entities of a Chinese dragon are featured, including the head of a camel, horns of a deer, scales of a carp, eyes of a rabbit, ears of a bull, neck of a snake, belly of a clam, paws of a tiger and claws of an eagle.

The dragon is also holding a giant pearl, which signifies the world, and represents celestial and terrestrial power, as well as wisdom and strength.

With an estimated one million people from around the province, country and the world visiting the fair, Stone’s sculptures will no longer be Chilliwack sculptures – they’ll be world sculptures.

Previous PNE artists have gone on to become stars, including Michael Buble​, or have had their work featured in galleries throughout Europe, or purchased within days of the fair opening.

That’s what Stone is hoping for.

“Next year is the year of the dragon and I think that will be a really big selling feature for my dragon,” said Stone.

“Ideally, I just want to see it permanently displayed somewhere for people to enjoy and where they don’t have to search the farmlands just to see it.”

The dragon is scheduled to be transported from Chilliwack to the fair grounds in Vancouver on Aug. 15.