A report by the department of defence report proposes scrapping the 250 tonne crane which has been in its current location at the Garden Island Naval Base since 1951.

The crane’s removal will free up additional berths which the department says will be needed later this year. The crane, which has not been used since 1996, reportedly costs $770,000 a year to maintain and yet still poses a safety risk. A rusted chunk of steel fell from the crane in 2007. 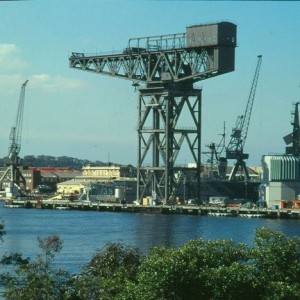 The 68 metre high crane is listed on the National Trust of Australia’s ‘heritage at risk’ register due to its lack of routine maintenance. The crane is one of six similar models of giant cantilever/hammerhead cranes built and installed in the 1930s through 1951 at the British naval shipyards of Portsmouth, Chatham and Devonport in England, Rosyth in Scotland, Singapore and Sydney.

The Sydney crane was specifically set up for the removal of the twin 18 inch gun barbettes (barbette = an armoured cylinder protecting a revolving turret on a warship), it was a copy of the Singapore crane which was destroyed in 1941 and designed in 1937 by Sir William Arrol and Company of Glasgow and Sir Alexander Gibb and Partners of London.

All mechanical components were supplied from the UK, with the Sydney crane replacing the Singapore crane. It has a maximum capacity of 250 tonnes and a maximum lifting radius of 40 metres.