Malta is one of the smallest nations on the planet. With a population of 410,000, It’s smaller than most major cities. Just off the coast of Italy there is something this tiny island nation is having no shortage of this year, tower crane accidents.

On February of this year Malta had their first tower crane accident that I knew of. It was a self-erector that collapsed without a specified cause. Two weeks ago (May 20th) they had a second tipping, again from an unspecified cause. This weekend the crane that fell on the 20th was being replaced. During the crane erection either a rigging failure or pendant failure occurred and the piece being hoisted into place was damaged.

I don’t think that I quite understand the lacksidasical attitude towards safety after the first accident. Wouldn’t you have a master rigger there and expect them to inspect the rigging? If it were a pendant failure, did you really decide against bringing in a crane inspector? Don’t you want an honest 3rd party opinion as virtually all manufacturers suggest? 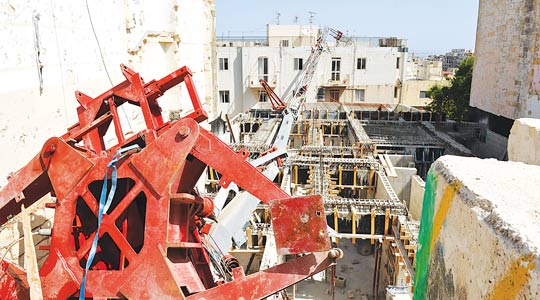 I can’t imagine that Maltans are going to put up with this. There were articles speaking out against the problem after the 2nd accident, so certainly the rhetoric will only become louder as 3 accidents in 4 months on an island of 410,000 people is ignorance on display.

(Picture is of May 20th Accident)