Five years after a mother and her two daughters died on Aberdeenshire’s roads, motoring groups have called for all modern vehicles to have MOTs.

Campaigner Barry Copeland’s wife and two children died after a mobile crane leaked oil onto the road in 2008. Thousands of vehicles, ranging from breakdown and construction vehicles to cranes, currently do not need an MOT. 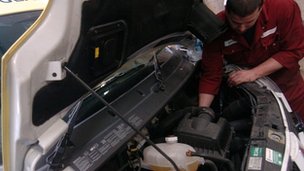 The UK transport minister said anyone who operates a vehicle already has to ensure it is roadworthy.

Mr Copeland has been campaigning for a change in the law since the deaths of his wife, Ann, and daughters Niamh, 10, and seven-year-old Ciara.

His family died in a crash on the A92 in Aberdeenshire, in January 2008.

An investigation at the time found that hydraulic fluid had spilled from a crane that had driven along the road a short time earlier. The vehicle did not need an MOT, and the leaking oil was most likely caused by poor maintenance, according to a Fatal Accident Inquiry into the deaths.

Mr Copeland believes an annual MOT for mobile cranes could have saved his family and his campaign for a change in the law has been backed by the findings of the FAI.

He told the BBC: “My wife was going to work, taking my children to school, she went round a corner and lost control of the car. All three were killed outright. They were hit side on by a vehicle on the other side of the carriageway.

“It turned out on investigation that the whole corner was covered in hydraulic fluid from some heavy vehicle.

“The most likely vehicle beyond probability was a mobile crane and it turned out that it was amongst thousands of vehicles that don’t require an MOT.

“It was fairly conclusively shown that if it had had an MOT that my wife and children wouldn’t have been in wrong place at the wrong time.”

Four years later, in a fatal accident inquiry, the sheriff found, on the balance of probabilities, that the company’s mobile crane had caused the accident, and it was likely the leak was caused by poor maintenance. The firm refused to comment to the BBC on the case.

In his determination, the sheriff recommended that “the UK government should enact legislation as a matter of urgency with the effect of removing the current exemptions applying to mobile cranes from undergoing a compulsory regular test of roadworthiness”.

Now unions and motoring organisations have joined the call for a change in the law.

Neil Greig, from the Institute of Advanced Motorists, said: “I think people would be surprised to hear that potentially tens of thousands of vehicles on our roads don’t have to have MOTs.

“Clearly these are vehicles that don’t have to spend a lot of time on our roads but with construction, for example, you could be travelling long distances between sites.

“Often these are vehicles that are going slowly so already you are causing road difficulties. You expect the drivers to be well trained but you also expect the vehicles to be well maintained as well, particularly when they are such large vehicles that if anything does go wrong the potential consequences could be huge.”

In 2009, the government launched a consultation to look on a law change, because they said several categories of exempt vehicles were actually contrary to EU law. The consultation was never published and has never seen the light of day until now.

The BBC used Freedom of Information laws to request the unpublished consultation responses, which showed that 84% of relevant respondents were in favour of a change in the law.

Matt Draper, national officer from the Unite union, which represents many of the drivers of vehicles which do not need MOTs, described the current situation as “ludicrous”.

He said: “Safety should be put first, this isn’t about creating bureaucracy its about making sure our roads are safe.

“I think the inertia around this government’s lack of willingness to make necessary changes just sums up their attitude, they just want to make changes that will pander to big business and not make these vital changes that could save lives.”

However, the UK’s transport minister, Stephen Hammond, said: “When we came to power we went through a detailed re-examination and freshly scrutinised the whole of what that consultation had brought forward.

“There are now also discussions going on at an EU level, reviewing roadworthiness legislation.

“When the outcome of that is known seem to be appropriate time to make decision.”