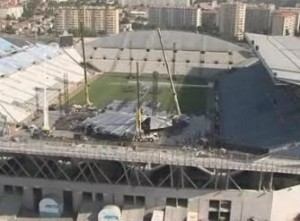 A second person has died following the collapse of a stage being constructed for a Madonna concert in France. Technicians had been setting up the stage at the Velodrome stadium in Marseilles when the partially-built roof fell in, bringing down a crane.

Crane safety alert on the effects of wind