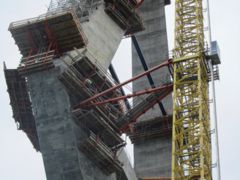 Operators of the Comansa crane being used on the La Pepa bridge construction in Cadiz Spain have easy and safe access to their cab via a Geda 2 PK crane-operator lift.

The crane is installed on one of the 180m high bridge pylons and with it the German made GEDA 2 PK which was installed by GEDA’s long-standing Spanish partner, Turbo Iber, who also rented the rack and pinion lift to the construction company onsite.

The new La Pepa bridge is being built to link Cádiz – located on a promontory to Puerto Real on the Spanish mainland. The existing bridge can no longer cope with the volume of traffic, which is approximately 40000 vehicles per day. The new suspension bridge is expected to greatly alleviate the traffic congestion in the region. In future, the transit time between town and port should be halved

With an overall length of more than 3km, La Pepa will be the longest bridge in Spain. The longest anchoring cable is 540m.

The GEDA crane-operator lift is used to quickly transport personnel to very high worksites it eliminates the risk and fatigue from climbing and the workplace is reached safely and quickly irrespective of the weather conditions.

The GEDA 2 PK is designed to transport 2 persons, with a payload of 200kg. This also means that material required for maintenance tasks can also be transported. The lift speed is 25m/minute and the maximum transportation height of the lift is 120m. Greater heights are possible on request.

Geda said, “While it is already obligatory to use crane-operator lifts in different Scandinavian countries and The Netherlands, there is no uniform European regulation. Because more and more companies realise how many advantages the use of a crane-operator lift has, the GEDA 2 PK is becoming more popular.”

The lift can also be used to safely recover an injured or ill crane operator without calling out a helicopter.

The lift is designed to be easy to assemble and is operated from the control panel in the cage with an additional option to control externally.

The GEDA 2 PK is designed to be suitable for use with all types of cranes from all manufacturers.

The bridge is expected to be complete in time to celebrate the 200th anniversary of the Spanish Constitution. The Constitution came into effect on the Saint Joseph’s day – in Spanish “Pepa” for who the bridge is named.