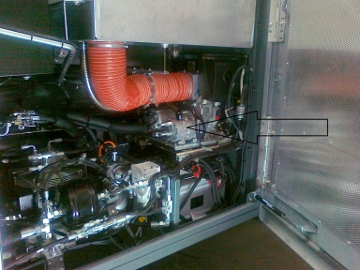 Liebherr Nenzing Crane Co., Ehingen, Germany, has introduced an auxiliary power unit (APU) on all its LR series lift cranes to power the air conditioning. The APU allows the operator to turn off the engine while staying cool, and saves the crane owner on fuel, service costs and residual value.

The fuel savings is estimated at 4 gallons (16 liters) per hour that it takes to run an average crawler crane engine on idle. Conservatively assuming a crane is run idle for 50 percent of the time, that is approximately 4,000 gallons (16,000 liters) a year.

Similarly, with operating hours halved, service intervals are lengthened and the amount of maintenance required is halved, which reduces costs and downtime. Additionally, with fewer operating hours on the clock, the residual value of the crane is significantly increased.

Liebherr Nenzing crawler cranes use 270kW or 450kW (362hp/600hp) diesel engines, depending on model. The APU, which uses a small 11kW (15hp) Hatz diesel motor, is integrated into the machinery house and secure from damage.

“Since California introduced its anti-idling regulations in 2008, there has been a growing realization among commercial vehicle owners that an auxiliary power supply unit, far from being an additional expense, is actually a real money saver, especial on a machine like a lift crane that spends most of its times idle,” said Scott Moreland, Liebherr Nenzing Crane vice president. “Most of my customers tell me that their cranes are typically idle for as much as 75 percent of the time that the engine is running. On that basis, we would easily expect the APU to pay for itself and start rapidly ramping up the savings within 12 to 15 months.”

You are the essence of your reactions and your responses.