VANCOUVER — Wind power is a late arrival to the British Columbia electricity grid.  But it’s catching up and is eventually expected to surpass run of river hydro power as the largest source of private-sector generation in B.C.

Since turbines first began turning in 2009 at the Bear Mountain wind farm near Dawson Creek, shipping power onto the BC Hydro grid, B.C.’s wind sector has grown to three projects, with five more in various stages of development. These include the Cape Scott wind project on Vancouver Island, which is now under construction and will become operational later this year.

The projects are massive — Cape Scott is a $300-million investment for GDF SUEZ Energy North America involving the installation of 33 kilometres of road and 23 bridges to access a 55-turbine, 350-hectare site located outside Cape Scott provincial park. At peak construction, the project will employ 250 people.

In a recent assessment of B.C.’s prospects for wind power, the Canadian Wind Energy Association (CanWEA) reported the province has potential for 4,700 gigawatt hours per year of electricity – or about eight per cent of B.C.’s total electricity generation capacity – at a cost of less than $87 per megawatt hour. That’s in the ballpark of BC Hydro’s present cost for new private-sector sources of power. 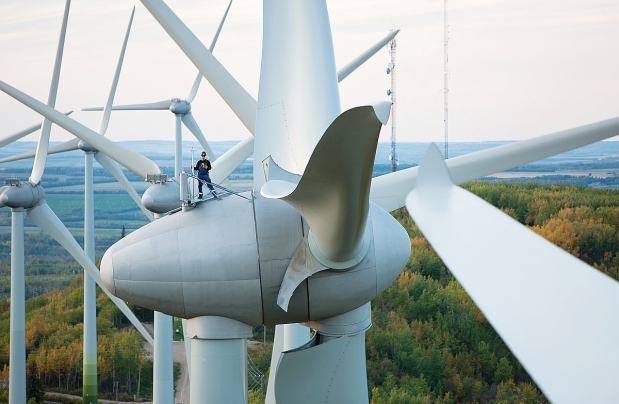 The Bear Mountain Wind Park in B.C.’s South Peace region was commissioned and fully connected to the B.C. power grid in October of 2009. Today it delivers enough clean, renewable electricity to power most of the region. Photo courtesy of AltaGas.

In order to get all those projects operational, the province will have to decide how it wants the wind power sector to grow in B.C.

It could proceed as it has since the Vander Zalm government opened B.C. to private power in the late 1980s, by adding new generation in gradual increments. Or it could allow an abrupt jump in green power capacity as a means of offsetting the huge increase in greenhouse gas emissions that’s expected with development of liquefied natural gas (LNG) for export.

If the province wants even more wind power, it’s available. CanWEA’s report, prepared by GL Garrard Hassan, determined there’s a further 18,000 gigawatt hours per year of wind power available at a price of about $95 per megawatt hour. That puts the cost of wind at or below the cost of run of river power — and makes it competitive with BC Hydro’s proposed $8-billion Site C hydroelectric generating station on the Peace River in northeast B.C.

Combined, both the cheaper and more expensive wind sources would be equivalent to about 40 per cent of BC Hydro’s existing generating capacity across the province.

It’s intermittent rather than baseline ‘firm’ power but it’s a good fit with hydro — because you can store water rather than release it while the wind is blowing.

“With electricity demand poised and projected to grow (with LNG development) there’s clearly an opportunity for wind energy to play a much larger role going forward. It’s our hope that will be possible,” Robert Hornung, CanWEA president, said in an interview.

B.C. was the last Canadian province to add wind power and remains far less reliant on wind than Quebec, Ontario and Alberta.

That’s due in part to BC Hydro’s low-cost ‘heritage’ network of large-scale hydroelectric stations and an abundance of smaller streams that could support run of river and tended to dominate the list of projects selected in a series of Hydro calls for power over the last decade.

That’s changing. Growing global adoption of wind power has led to technology improvements that have made turbines more efficient, and increased production has pushed down the cost of equipment so much that wind is now competitive with anything except combined-cycle gas generation, according to a recent study of energy generation costs in Alberta.

“With (natural) gas prices where they are today, yes, it’s challenging today for wind to compete with gas,” Hornung said. “Having said that, when you are building electricity generation infrastructure you are not building it just for today. You are building it for a minimum of 20 years and quite probably longer than that.

“Of course the one thing you have some certainty of when you are building with wind is that you know what that cost is going to be for the entire period – and you don’t know that with gas.

“Wind at worst will have stable prices but it’s likely to continue declining in cost as technological evolution continues to proceed.”

By being late into wind power development, the province now has the opportunity to add significant new resources at lower electricity production costs than those available just a few years ago, Hornung said.

The cost of turbines has dropped 20 to 30 per cent since 2009, and the productivity of tiers one, two and three wind resources has increased by six to 18 per cent in the last year alone, BC Hydro recently reported.

“British Columbia is obviously one of the few jurisdictions in the country that still has the potential to see much more significant growth because of the potential electricity demand needs associated with some of the LNG proposals and resource development in the north of the province,” Hornung said.

He cited one further advantage wind power has over run of river — it’s at its annual productive peak in winter when many streams are at a seasonal ebb. Run of river power is most robust during spring run-off, which is when Hydro has the least need of additional electricity supply.

Last spring, for example, Hydro was forced to shut down some of its own generation assets while paying higher than market prices for run of river power.

That situation prompted questions from a broad spectrum of critics, including the B.C. NDP and BC Hydro’s major industrial power customers, about the wisdom of having Hydro contract private-sector power supply when it could instead have speculated on the western North America electricity trading market to meet peak power demands by its customers.

Paul Kariya, executive director of Clean Energy BC, which represents independent power producers, said the contracts look controversial when short-term electricity costs are low. But over the long term, he said, B.C. has gained supply security.

As a complement to LNG development, he added, wind could help offset the accompanying spike in greenhouse gas emissions.

“Can we build a system that burns gas now but over the longer term builds in more renewables? Kariya wondered.

What does your voicemail say about you?