Terex Material Handling has been awarded a contract by Airbus to supply 10 Demag process cranes for its assembly facility in Mobile, Ala. The cranes will be used during the final assembly of the A320 family of aircrafts in Aibus’s three production hangars. Measuring up to 218 ft. in length and offering maximum load capacities of some 27.5 tons, the process cranes feature up to four suspensions for safe and precise handling of sensitive aircraft components. 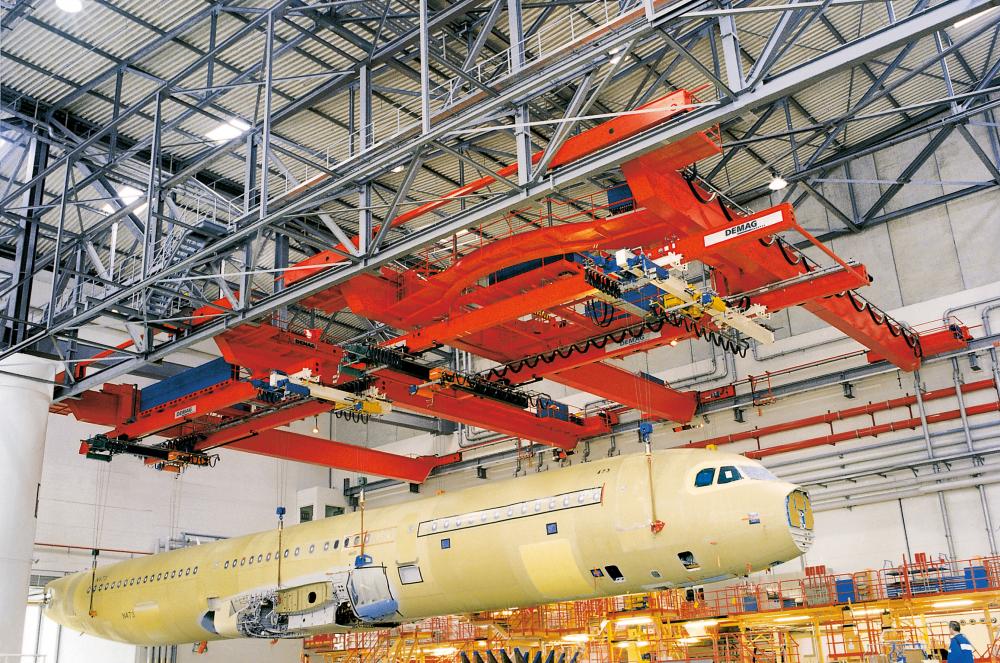 The heart of the new Airbus plant is the 836.6-ft. long Final Assembly Line hangar, where five process cranes will operate in a series of three assembly zones. In Zone 1, three cranes will be installed for transporting fuselages for the fuselage assembly operation. Featuring quadruple suspension arrangements, the double-girder suspension cranes have a total length of 218 ft. and travel on a common crane runway. Installed on each of the crane girders is a main trolley, which accommodates four Demag 6.3 t hoist units that operate on two traversing bridges. Due to the precise control of 12 motion axes per crane, Airbus will be able to position the individual fuselage sections that measure 13 ft. in diameter with an extremely high level of accuracy.

To ensure that the fuselage segments are gently picked up, the cranes will be equipped with a semi-automatic rope tensioning system. Once the four hoist units have each lifted a specified load of 300 kg, they continue to lift the suspended payload in a synchronized motion to avoid any flexing of the sensitive aircraft components. After all fuselage segments have been assembled, the cranes transport the complete fuselage to the next assembly station. To do this, both process cranes and their eight hoist units operate under synchronized control.

In Zone two, two wing-handling cranes will be responsible for the lifting motions during the wing assembly process. Both process cranes are each equipped with two traversing bridges with a total of three 3.2 t hoist units, which pick up the waiting wings and position them precisely as required for the assembly operation.

Finally, in Zone three, an assembly crane with a 5 t Demag standard-headroom traveling hoist unit will be used for the assembly of the tail units and handling other components.

Two identical Demag process cranes of single-girder design also will be used in the final phase hangar. These cranes feature multiple suspensions and each operates on four crane runways that are arranged parallel to each other. With a length of 131.2 ft. and a load capacity of 5 t, these crane installations are designed for transporting the components swiftly to where they are needed for installation on the aircraft.

The individual parts of the aircraft, such as the fuselage, wings and tail unit, are pre-assembled at locations throughout Airbus’ European production network and will be transported to the transhipment hangar in Mobile. Two single-girder suspension cranes, each equipped with two 7.5 t Demag hoist units, operate in this hangar, which is upstream of the assembly process. The cranes are employed as stand-alone units as well as in tandem mode for handling the incoming aircraft components. Monitoring systems provide for synchronized lifting and transport motions with up to four hoist units to ensure that even large and bulky assemblies are handled safely and reliably.