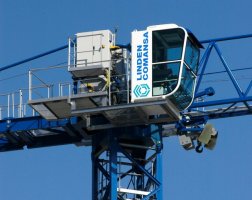 The new Effi-Plus system increases hoist and lowering speeds with light loads up to 70%, so that the hoist cycle time is significantly shortened, the company says. Effi-Plus has been applied to the 24 kW, 37 kW, 50 kW and 65kW drives of its LC1100, LC2100 and LCL series cranes at no extra cost to customers.

The new drive system has been developed in-house by Linden Comansa. It does not use gearboxes with electrically or manually operated clutches, so that costly problems and difficult maintenance are eliminated, it says.

The maximum speed of the electric motor is kept low, thus minimising maintenance needs and extending the life expectancy of the motor and gearbox. Low motor speed allows the use a simple electromagnetic brake appended to the motor instead of a more complex brake system.