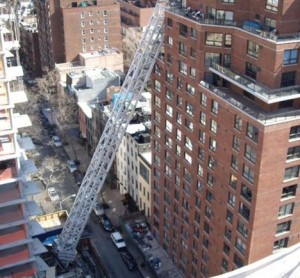 Marquette was arrested in 2008 for falsifying crane inspection records, including those for the tower crane that collapsed at East 51st Street in March 2008, killing seven.

Marquette was convicted last July on two felony counts of falsifying records and faced up to four years in prison for each. Prosecutors requested a sentence of one to three years in prison.

At his sentencing yesterday in the State Supreme Court in Manhattan, Justice Thomas Farber said that he was unclear about what to do in the case.

“The case is not as it appeared to be originally and things change, people change. On the one hand Marquette’s actions placed lives at risk. Other inspectors and city residents should know that such conduct is not tolerated, said the judge.

“Yet on the other hand, his conduct appeared to have been condoned by his superiors and was not limited to him and he now has his drinking problem under control. This case falls into the most difficult category for sentencing, one in which people who have led good lives do something very wrong.”

In the end the judge handed out five years of probation, with no prison time, on the understanding that he remains sober.

Subsequent investigations determined that while Marquette had not actually inspected the crane 11 days prior to the collapse as had been claimed in the paperwork, the inspection would not have changed the course of events, which was due to corners being cut in the installation of a tower tie-in collar.