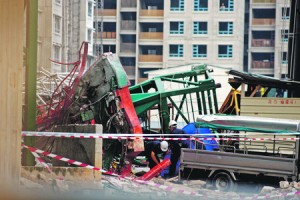 Singapore, A tower crane collapsed today killing one 32 year old worker and injuring three others. The crane was being dismantled at the time.

The story describes the collapse of the boom. The included picture shows a turntable that separated from the mast. You can see the pin holes with no pins in place. I’m wondering where they are. Two possibilities come to mind. The crane was being climbed down and the climber was not attached to the turntable. If it were they (the climber) almost invariably come with the turntable. I don’t see structure or pins there so they assumption of a climbing operation explaining the missing pins doesn’t ring true. Is it possible that the pins from the turntable to the mast were removed before all of the horizontal was removed? I can’t imagine why and can only point to one potential cause… The workers taken to the hospital included a Thai, Chinese, and Bangladeshi. They were working in Singapore. What language did they use? How well did they communicate amongst each other?

When I see these stories of multi-national teams working on tower canes I shudder to think of the dangers of not understanding each other. I don’t have nearly enough information to determine the cause of this accident. What I can say is that I wouldn’t work on a crane where everyone didn’t speak English. If I was the odd man out, fine. It’s the safer choice.

I worked in Hawaii 3-7 days a month for 4 years. The challenge of speaking the same language with vast accent differences was tough enough, not to mention the difference in phrasing. Eventually it became normal, but it was a learning curve. To take that to another language, I can’t see any good coming from that. No matter what country you are from, think of how hard it is to understand a foreigner who speaks the same language in a quiet room. Now stand 40 feet apart on a noisy construction site and explain what pins to remove and which ones not to? That has disaster written all over it.