The boom of a crawler crane dropped across a road onto a parked car on Saturday in the town of Subang Jaya, Malaysia- a suburb of Kuala Lumpur.

The 50 tonne crane was working on the extension to Kuala Lumpur’s Light Rail Transit (LRT) system to the town, being built by contractor TRC. It was said to have been supporting a pile driving device and working on boundary piles on the site.

The car was parked outside the home of its owner who was in residence at the time. 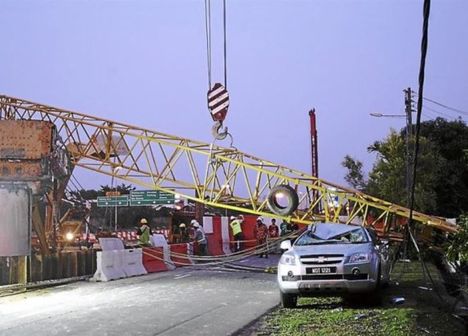 The crane crew was quickly ready to remove the boom

Witnesses say that the contractor attempted to use another crane to quickly remove the boom from the street, but was stopped and told to wait the arrival of the police and emergency services. A Stop Work order was then issued.

No one was hurt in the incident.

Audi on the Roof