A crawler crane working from a barge on a marina expansion project at South Whidbey Harbour, Langley, Washington state, was dumped in the water last wednesday, while working on sheet piles.

A slip collar connecting the crane to a pile became caught, the crew in an attempt to prevent what seemed like a impending overturn, cut the pile free from the crane. The sudden release of the load caused a recoil reaction throwing the crane off the barge into the 14 metres of water.

Although one of the barge crew fell into the water he was not hurt and no injuries have been reported. The barge is owned by Neptune Marine, and is subcontracted to Mike Carlson Enterprises, the main contractor for the expansion project. 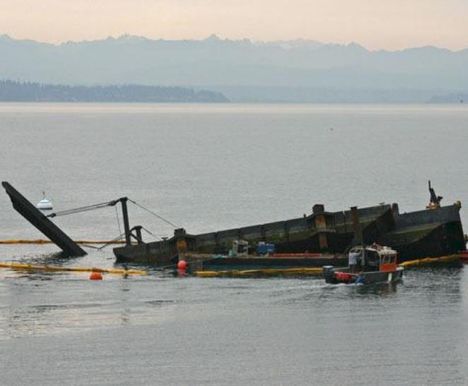 The overturned barge, the crane is in the water and down around 14 metres

The crane is lying on its side in the mud, with s broken counterweight. The plan now that the crane and barge are surrounded with an oil protection boom, is to move the barge away from the crane and put a buoy over it to mark its location under the water, for later recovery.