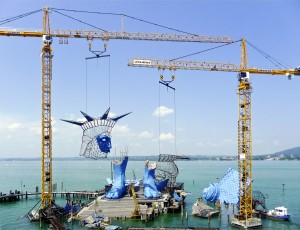 Two Liebherr top-slewing cranes will be putting on a star performance in the opera Aida at the Bregenz Lakeside Theatre. The cranes, a 550 EC-H 40 FR.tronic and a 280 EC-H 12 Litronic, are actively involved in the opera, shifting parts of the stage setting, some of which weigh up to 12 tonnes, as the drama unfolds. And it is not only the operation of the cranes that plays a part; the profiles of the machines have become integral to the stage set, with the towers and jibs forming a giant frame enclosing the world’s largest open-air opera stage and the night sky above Lake Constance for the 2009 and 2010 seasons.

Liebherr cranes have in fact been playing a supporting role for many years in setting up the large stage scenery ele-ments at Bregenz Lakeside Theatre. A 71 K fast-erecting crane has been permanently installed since the year 2000 as a trusted lifting aid for setting up the backdrops. The 71 K is mounted on a pontoon measuring 15 x 13 metres, and is set up in such a way that it operates with total reliability despite the movements caused by the surface of the water.