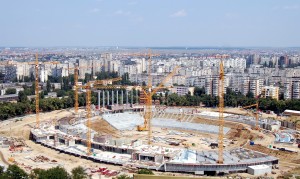 Seven Liebherr construction cranes are hard at work building the new Lia Manoliu National Stadium in Bucharest, capital of Romania. The free-standing assembled top-slewing cranes are helping to ensure that the project goes smoothly by handling a total of about 9,000 tonnes of steel, 75,000 m³ of cast-in-place concrete, and 25,000 m³ of prefabricated components.

The construction cranes being used for the work, of Series K, EC-HM, EC-H, and EC-B, are installed on foundation an-chors, cruciform bases, or can travel on rails. In order to be able to provide flexible coverage over a greater area when constructing the stand, a 245 EC-HM 8 FR.tronic with a 256 HC tower system is mounted on rails. Two flat-top cranes of the types 250 EC B 12 Litronic and 200 EC-B 10 Litronic are likewise mounted on the 256 HC tower system and can achieve hook heights of 52.4 m or 48.3 m respectively, with working radii of up 65.0 m. In addition to these, three cranes of the 280 EC-H type are being used, two of them in the 12-tonne format and one in the 16-tonne version. The EC-H cranes are designed with hook heights of up to 68.6 m, and being operated with working radii of between 65.0 and 70.0 m. A 63 K fast-erecting crane rounds off the fleet of cranes hard at work on the new stadium.

The project planning for the crane fleet, and the consultation during the planning phase, were provided jointly by the local sales and service team from Liebherr-Romania SRL, and experts from Liebherr-Export AG, Nussbaumen (Switzerland) and the production plant in Biberach (Germany). The provi-sion of special solutions specific to the project during the bid-ding phase was a key factor for the construction company entrusted with the work, Max Bögl Bauunternehmung GmbH & Co. KG, deciding to use Liebherr construction cranes for the project.

Because the difficult traffic situation in Bucharest means that deliveries can only be made to the site at night, the prefabri-cated concrete components required are being produced in a plant especially built for the purpose directly next to the sta-dium. This plant, next to the stadium site, includes a com-plete mixing installation, also operated by Max Bögl Bauunternehmung GmbH & Co. KG.

Liebherr-Romania SRL is not only responsible for planning and carrying out the assembly of the crane fleet, but is also providing experienced crane drivers. The wide range of cus-tomer services is supplemented by a team ready and on call 24 hours a day, to ensure the availability and reliability of the cranes at any time day or night. This is additionally supported by the remote data transfer system (DFÜ) with the Teleser-vice function, with which the cranes are equipped, and which guarantees the dialogue from Customer Service to access the current operational data of the cranes. With highly de-tailed information about the cranes at work, any potential problems can be identified early on, and downtimes avoided.

Liebherr-Werk Biberach GmbH often features in stadium pro-jects on this scale, not only as a crane supplier, but also as a service provider for operational project planning for the cranes. At the football World Cup in 2006 Liebherr was al-ready providing the know-how gained from decades of ex-perience to plan some extremely difficult crane operations on a number of stadium buildings, among them the Allianz-Arena in Munich. And during the construction of the stadia for the 2010 World Cup in Cape Town and Johannesburg, too, specialists from Liebherr were again providing their skills in making sure the Liebherr crane fleet performed perfectly – as they always do.