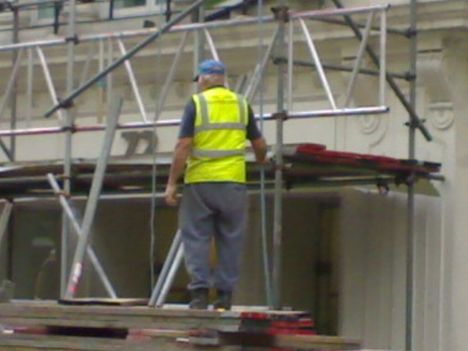 A reader in the UK spotted a scaffold team erecting a tube a coupler façade scaffold on Sunday and felt it qualified for our Death Wish series. The scaffold was being erected by a scaffold company called Red Lion, next to the Canon Street railway station near St Pauls in the City of London. Our corresponded says: “One man was wearing a harness but was not using it the other on the scaffold had no harness or hard hat. The third man stood on the truck pulling on the gin rope had no harness and no head protection should anything fall from the work going on above. With all the talk of work at height regulations, the efforts of industry associations to improve safety with programmes such as Through The Trap tower erection, and of manufacturers with their advance guardrail systems for towers, we have scaffolding such as this being erected in the capital city of the country that preaches safety more than any other, in a manner which clearly ignores basic rules. One wonders how tube and coupler scaffold can still compete with system scaffold, given the cost of skilled labour these days. That aside it is interesting to note that all three men have their HI-Viz vests on yet don’t bother with harnesses or hard hats which are likely to contribute a great deal more to their safety that a brightly coloured jacket. The man on the truck in particular, standing on a stack of scaffold planks as he operates the hoist, makes a mockery of the HSE’s efforts to enforce risk assessments for working at any height. It is also hard to square this with the efforts that some companies make to meet the Work At Height Rules, such as crane hirers which fit guardrails and steps to their relatively low trailers such as those designed to carry counterweights. One positive thing is that the scaffold poles and in particular the planks all look to be in good condition and relatively new – not so sure about the couplers – although to be fair the photographs are not good enough to comment.

Rigging Tips: Sizing up the situation