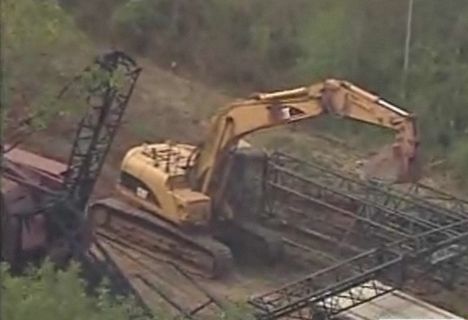 A man was seriously injured last week in Choctaw, Oklahoma after a boom section landed on him. The accident happened on a bridge repair project when a lattice crane boom section fell on him. The section was being lifted by a 360 degree tracked excavator when it slipped, struck the man on the head and then pinned him to the ground. The section was quickly lifted off of him and he was airlifted to hospital by helicopter. We do not have any news of his condition. The principal contractor on the site is Sewell Brothers of Oklahoma, there were a number of crawler cranes of considerable vintage on site at the time in addition to the crane being rigged/stripped out.