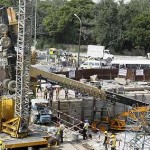 Delhi Metro’s run of bad luck continues. Two mishaps were reported from under-construction sites in the Capital on Saturday. A labourer was critically injured  in one of the incidents.

Bhuvan Bhumiya (35), employed by a Metro contractor to lay electric lines on tracks of the Yamuna Bank-Noida route, fell from an elevated corridor near Akshardham Temple in east Delhi on Saturday evening. He has been hospitalised and a case of negligence lodged.

In another incident, more than 20 workers had a narrow escape when a crane belonging to a Metro contractor developed a mechanical problem and toppled over at 90 degrees at Said-ul-ajab, near Saket, on Mehrauli Badarpur Road in south Delhi.