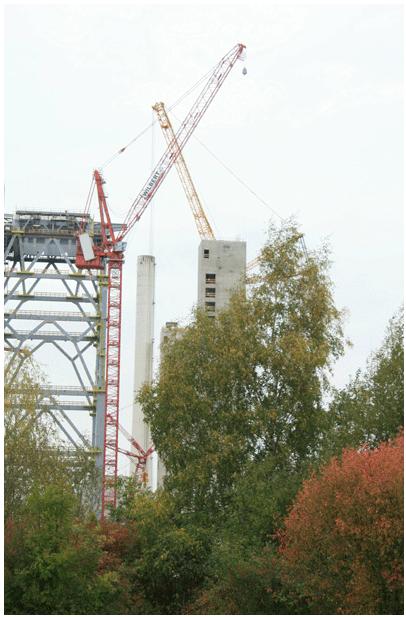 The first picture of Wilbert Turmkrane’s giant WT 1905L e.tronic at work has been released to IC. Claimed to be Europe’s largest luffing jib climbing tower crane, the model was launched in April 2009. Here, it is carrying out lifting duties at a power plant in Hamm, Germany.

In May, special correspondent Heinz-Gert Kessel revealed details of the new crane:

It is the first model in the German manufacturer’s “Heavy-Lifter” product line. The new model already surpasses its closest-competing climbing luffing jib tower, the new Wolff 1250B, by about 50% at medium to maximum operating radius, says Kessel.

Internationally, the new giant manufactured in the all new Wilbert factory in Waldlaubersheim, Germany, can easily compete with the Favelle Favco M1250D at more than 25 m radius, Kessel continues. At long reach the WT 1905L e.tronic even catches up with the popular Favelle Favco M1280D. Capacity of that crane is 23.5 tonnes at 72 m radius and 30 tonnes at 60 m.

Due to its modular design, customer requests for the Heavy-Lifter line can be quickly realized concerning the length of the counter jib, winch capacity and maximum load. Performance data for the WT 1905L e.tronic makes impressive reading: to 25 m radius 80 tonnes can be handled and capacity is still 19 tonnes at the 78 m maximum radius.