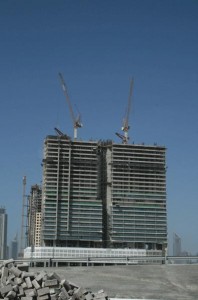 The Bay Square development is a multi tower project with water frontage that is one of many projects scheduled for the Business Bay area, which is set to become the commercial hub for the Emirate City.

One of the two developments is the 30 storey Windsor Manor tower comprising a retail floor, five podium levels and 24 floors of apartments. The 105 m tower will be topped by a roof canopy feature comprising a steel beam around the perimeter of the roof and encased by poured in-situ concrete.

Immediately alongside the Windsor Manor is the second tower, the Al Shafer Residential Development, where ASGC is using a 112 HC-L luffer. The 27 storey mixed use tower, like the Windsor, is designed by Khatib & Alam Consolidated and is of pre cast panel construction.