Canada’s crane sector has weathered the economic downturn so well that the coming year could see a continued shortage of skilled operators, industry insiders say.

Chris Power, who oversees Canadian sales for Coast Crane in Surrey, B.C., reports a “fantastic” year with “unbelievable growth.” The problem, he points out, is that the strong market for projects needs to be matched by enough professionals to do the work.

Coast Crane rents out tower cranes, boom trucks and all-terrain cranes, and also sells 15 different brands. But the Seattle-based company, which serves the entire west coast, does not supply operators.

So Power has watched customers scrambling to find skilled labour.

“Projects get delayed and postponed because they’re looking for operators,” Power says. “We heard about one project where one of our tower cranes was up, the operator got sick, and the crane was shut down for a month.”

The market’s so hot, in fact, that Power says he’s hoping the oil patch cools off a bit. “I’m looking to get a boom truck mounted and I can’t find anybody. It’s just crazy.”

As for the coming year, Power anticipates record growth and record income for his company. He sees particularly strong demand for rough-terrain cranes due to a continued positive market for transmission lines, hydroelectric facilities, and mines.

The situation’s much the same in Saskatchewan. Damon Giesbrecht, who oversees finances for Giesbrecht Cranes of Regina, anticipates a stable market over the next 12 to 18 months, largely because of a healthy potash sector he compares to oil in Alberta.

“People will always need to eat,” Giesbrecht says, explaining that potash is used in fertilizer, and cranes of all kinds are used to build new mines and operate existing ones.

“There’s a fair number of larger projects breaking ground and going forward into 2013,” Giesbrecht says. “I don’t see anything getting shelved.”

And, while Alberta is Canada’s go-to province for oil and gas, Saskatchewan holds strong potential, too, Giesbrecht says. “Our oil and gas hasn’t been nearly as tapped as what Alberta has, but it’s slowly getting there and the government is starting to sell royalties.”

In Regina, demand for rough-terrain cranes for steel erection on the commercial side is faring well enough, and residential construction is growing steadily.

“Regina has been an untapped market,” Giesbrecht says, explaining that the city has been successful in attracting corporate interests such as a retail food distribution facility. Early planning is also underway for a new sports stadium.

In Quebec, Guillaume Gagnon, a vice-president with Montreal-based Grues Guay, has been busy supplying machines and operators to the province’s burgeoning mining, hydroelectric and wind sectors.

Gagnon anticipates this activity will continue through 2013 in large part because the government has committed to energy projects for many years to come. However, he points to a lack of skilled operators and attributes this, in part, to a shortage of new graduates.

“There’s a lot of competition to keep your own crane operator,” Gagnon says. “We have a lot, and we treat them right so they stay with us.

Gagnon says Quebec was able to dodge much of the recent economic downturn, largely because the provincial government made significant investments in infrastructure. He says he has fairly high hopes for 2013 but expects growth will slow somewhat. “It can’t always stay like it is.”

At CKG Overhead Crane and Hoist in Bedford, Nova Scotia, sales manager Glenn O’Neil is looking to the U.S. for a sense of how the economy will play out in the Maritimes.

“If the U.S. goes into a recession, Canada could also fall into recession,” O’Neil says, pointing out the risk to Canadian exports.

Still, things are stable enough for CKG, which sells and services overhead cranes and specializes in Demag products. “This year’s been a bumper crop year for them. It’s been one of their better years for crane sales,” he says.

Also helping matters are government-driven infrastructure projects such as the Muskrat Falls hydroelectric project in Newfoundland and defense department work in Halifax.

“We’re holding our own in terms of servicing cranes,” O’Neil says. “I think it will remain that way for the first three quarters of the year, and then hopefully the fourth quarter will start to pick up.”

O’Neil also reports a labour shortage. “We’ve had to develop our own apprenticeship program because there’s a real lack of skilled labour available in Atlantic Canada. Everyone’s fleeing to the Alberta oil fields.”

Ontario, meanwhile, is also faring well. Valerie Brennan, vice-president with Amherst Group in Toronto, says the huge number of buildings going up downtown and across the region will have a continued impact on the crane sector.

“There will be a catch-up on infrastructure to support that growth, including hospitals, power plants, treatment plants, highways, roads and subways. Things like these will kick in, and we’ll be pretty steady for the next few years.” 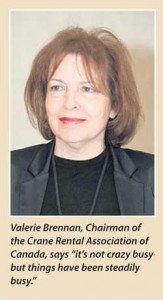 Elsewhere in Ontario, Windsor was lagging behind thanks to a downturn in the auto sector, but Brennan says she’s hearing business is picking up there. And, with new mines and hydro facilities generating demand in remote northern Ontario, she expects continued activity in 2013.

As current Chairman of the Crane Rental Association of Canada, Brennan is watching the country as a whole. She has an optimistic view of the year ahead.

“I’m hearing the same sort of thing from everyone else — it’s not crazy busy but things have been steadily busy. Despite the fact that the Canadian economy isn’t motoring along, the construction industry is still moving ahead of it. Everyone seems to be gung-ho on construction.”

As for the shortage of skilled tradespeople, Brennan holds hope with skilled immigrants seeing Canada as a relatively stable place to live. “The politicians I’ve talked to recognize that and are trying to work in that direction so that immigration will speak to having people come here who have the skills we need.”