A boom truck overturned in Mount Vernon, Virginia yesterday, injuring two people, its boom came to rest on a church. 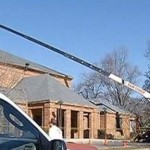 The crane was lifting the two men in a suspended platform when the unit went over. Perkins said that the rear outrigger “started to compress” It looks as though it might have sunk into the ground rather than anything else.

The effect was to cause the crane to lose stability and start to tip, having seen the outrigger issue Perkins started sucking the boom in as fast as he could, his fast action meant that the two had a shorter drop onto the roof and therefore suffered only minor injuries.

69 children and 12 staff at the adjoining pre-school were evacuated and went home early for the day.

It is surprising to see a suspended man platform being used for this sort of work, although sometimes it is the only method possible. What we do not know is whether the outrigger sank into the ground, or the jack started to lose oil? Fortunately injuries were minor.

While the crane operator did well to bring the two men in closer and may have saved their lives, however the outrigger mats look like small offcuts and what looks like scrap – being used under the outriggers.