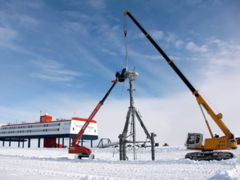 Two Sennebogen Star Lifter 3300 crawler cranes assisted in the construction of the Neumayer-Station III research station in Antartica. A third Sennebogen crawler, a 648, is being used on-site for building and servicing duties.  The work took a total of seven months carried out over two Antarctic summers before the station opened in February 2009.m It can accommodate up to nine people.  Temperatures reached -40 degrees centigrade, while wind speeds peaked at 25 minutes per second.

Neumayer-Station III is the first research base in Antarctica with a platform-based work centre above ground connected to a sub-terrain garage built in into the ice and snow. The station, which is operated by the Alfred Wegener Institute for Polar and Marine Research, part of the Helmholtz Association, stands on 16 hydraulic lifting devices and can be lifted as a whole to compensate for the annual accumulation of snow.  In the garage, a fleet of snow-going vehicles are joined by a custom-built Sennebogen 643 telescopic crawler crane. The crane is configured to meet specific requirements with a short 23.4 m boom and 20 tonne hook. Standard configuration of the 643 is a 30 m boom and a 40 tonne lifting capacity. It is used for a wide range of lifting tasks, for example building a 30 kilowatt wind power plant, which contributes to the station’s environmentally-friendly energy supply.

The crawler undercarriage, with its large footprint, allows it to travel easily over snow, says the manufacturer. “It ensures safe working conditions under extreme conditions. It is only possible with this crane to lift and move 20-foot containers from the heavy-duty sledge to the snow surface. Even larger objects, such as antenna systems, or measuring devices can be lifted with the up to the roof area of the Neumayer-Station with the Sennebogen 643 R,” said a company spokesman.