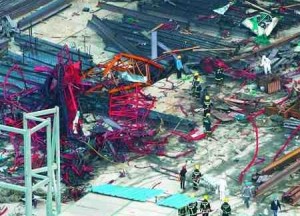 Dongguan City, China A Tower Crane from somewhere near the 50th floor of a planned 68 floor building. 3 people were killed with 5 injured. The story that I’ve found so far on it reports it as a “quality problem” with the crane already.

The Chinese cranes that I’ve seen here in Washington have reasonable workmanship. During a foundation load test, I was even concerned that maybe they were too strong, or underrated from the factory. You could see little deflection sighting up the tower. The tie-ins were very loose with pin play from the collar to struts as much as 11 mm from centerline. The response I got to this condition was that it was “acceptable” where as a German manufacturer only allows 1.5 mm for the same connection. There were many design issues with the crane such as having slewing gears inside the turntable (occupied space during climb) with no gear covers. The hook had no rating or data available to reference it’s size or measurements. The wedge and socket had not markings on them to reference size of rope or manufacturer. There was an article in 2007 about dangerous steel from China being used in tower cranes. All of these things are required here in the US. I had other questions as well.

We can only hope that China continues to improve for the safety of it’s people and anyone whom buys their cranes. If anyone gets more details, please share them.

Edit : Today reports are that the “power arm” broke. It’s not clear to me if the mean the counterjib or jib. They speak about the counterweights breaking away, but it’s lost in translation I believe.There are tremendous stresses behind the pendants of some counter jibs, of course depending on design. On some you have a lot of weight cantilevered out and counterweight placement is critical. it’s not much more of an answer, but it’s jib related either way. Link