We have received some advance pictures of a new Liebherr 750 tonne All Terrain crane which will be unveiled next week – the LTM1750-9.1. We have very few details on the new crane, but Liebherr has confirmed that it will be launched next week, along with another new model at the company’s upcoming open days in Ehingen, Germany. 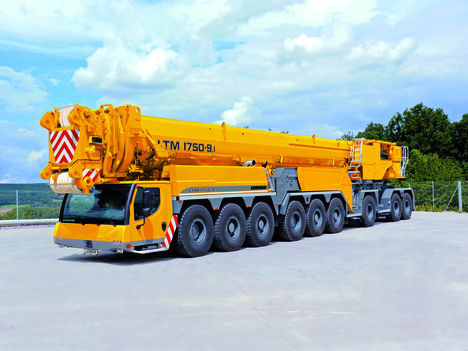 The nine axle LTM1750-9.1 has a relatively short, 52 metre boom that looks heavy duty for its size. While Liebherr has confirmed nothing, the new crane looks to have been developed with wind turbine work in mind – specifically turbines with nacelle heights of 90 and 100 metres. A heavy duty extension takes the hook height to 87 metres, to which a short heavy duty luffing jib can be added to provide the 105 metre maximum hook height.