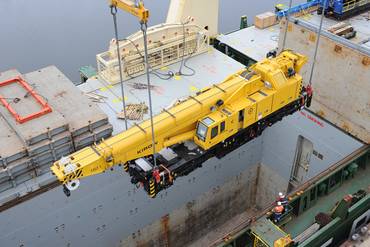 November 15 – Three rail-mounted cranes manufactured by German manufacturer Kirow have been shipped from the Wallmann Terminal in Hamburg to a Chinese customer by project forwarder Kühne + Nagel onboard multipurpose vessel Rickmers Jakarta.  The shipment is bound for Xingang, China, where it is scheduled to arrive in late November. Each crane has a length of 19.5 m and weighs 167 tonnes.  Rated at 160 tonnes, these cranes are able to move whilst under load and can be combined to form a block train. The customer in China is the Chinese Ministry of Railways, which will utilise them in various locations.  This shipment is part of a larger project that in total will see 16 railway cranes shipped to China between December 2009 and November 2010.  Rickmers Jakarta is one of nine identical ships which were phased into service between 2002 and 2004.  The Wallmann terminal, in which Rickmers-Linie holds a share of just over 25 per cent, specialises in the handling of out-of-gauge, heavy lift and project cargo.