The jib of a tower crane working on a construction site in Uetendorf near Thun, Switzerland buckled last week dropping its load into the site.

The crane, owned or contracted by the Thun based contractor Läderach Weibel, was lifting what looks like a skip full of supplies and materials at the site of a housing development when the jib of the Potain crane buckled. Fortunately no-one was injured in the incident.

The contractor while thankful that no one was hurt suggests that the incident was caused by the operator lifting an excessive load too quickly adding a dynamic loading to an already overloaded crane, thus causing the failure. However the hook looks to be fairly close in to the tower and it looks as though the trolley cable has caused the buckling. 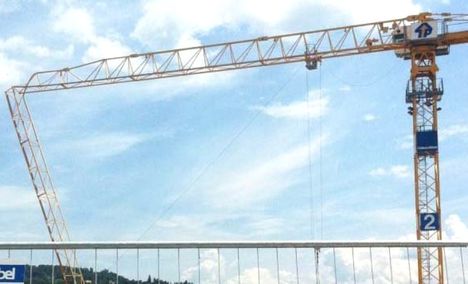 The buckled jib of the tower crane working in Uetendorf, Switzerland