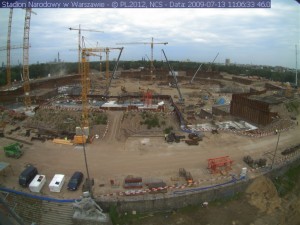 Warsaw Poland, The Poles are building a new National Football (read soccer in North America) Stadium in Warsaw. They have multiple cranes both Mobile and Tower throughout the job site. Yesterday two workers died when they fell 50 feet in a elevator car attached to the crane. Story

This is a first for me. I’ve never seen an elevator on the side of a crane. For us in the US, the idea of an elevator is one of those mystical winged horse ideas. I’ve climbed over 600 feet of tower on a suspension bridge. I do think that it’s a decent idea for getting tools onto the crane and for any rescue operations that may need to happen. But since I’ve never seen one of these elevators, I have to make some assumptions. If I’m wrong about their construction, please let me know. I’d love to learn about these.

I assume that the elevators were are talking about are similar to regular Construction Hoists that fall under ANSI A10.4 here in the US. A rack and pinion, electric (potentially hydraulic) drive system held to it’s track by guide rollers. (For come quick background, in my part of the world, the crane erector often erects both the crane and Hoist as a package deal. I was a licensed Elevator Mechanic in Washington State and now inspect them as well as Tower Cranes.) Most modern (last 15 years) elevators have three electric motors on the car. The point is not just power but also redundancy. If all three were to fail, then there is an overspeed governor that should kick in at 125% of the cars rated speed. The old style is a cable driven clamp system that squeezes the tower legs until it grinds to a stop, and the new is essentially a brake on a gear that gets tighter as the car travels further, after it’s engaged of course. The system should be tested after the install. The overspeed governors should be swapped out every four years or so. They do have dates on them. I wouldn’t expect to see a counterweight system because they you are added load to the top of the crane whether the is at the top or bottom.

I certainly don’t know what caused this accident. I bring up common designs just for understanding of how they work. I would suggest that if your operator is taking an elevator, he isn’t inspecting his crane, so who is? Guys hop in elevators and run them because they are easy. Installation and maintenance of elevators is dangerous and important work. It should only be done with a very experienced supervisor involved.