Demolition the Nooderlaan bridge in Antwerp 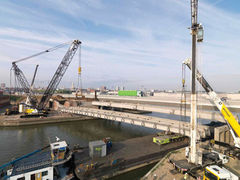 In these ‘green’ days, there is a constant requirement to minimise the impact of man’s activities on the environment. In Belgium, the waterways system is a major transportation network, but the existing canal and lock network, much of which was built in the early 1900s, is beginning to show its age.

In addition, the nature of the original infrastructure is limiting the capacity of traffic on the network.