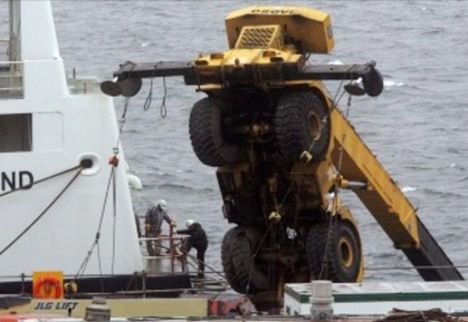 A 55 ton Rough Terrain crane tipped over at the Halifax shipyard in Nova Scotia, Canada earlier today. The 61 year-old operator suffered only minor bruising from the accident. He was though taken to Hospital as a precaution.

The crane a Grove, was lifting a forklift truck off of a passenger ferry which was undergioing a refit in the shipyard, when it went over. The fork lift ended up in the water, the crane boom remains in the water too, but the rest of the crane appears undamaged. The ship also escaped any significant damage.

The Nova Scotia Department of Labour sent an inspector into the shipyard to conduct an investigation into what happened.

The Halifax Shipyard is owned by Irving Shipbuilding, which boasts a strong safety record. However it would appear that this accident was caused by overloading. Possibly by the operator taking the fork truck out to too great radius for the crane?