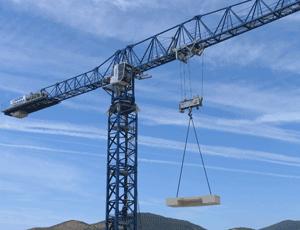 Tower crane manufacturer Linden Comansa, Pamplona, Spain, has launched a new version of its Flat-Top 21 LC 550. This crane, which until now had two versions—13.2 and 19.8 ton of maximum load—has a new variation that can load up to 26.4 tons.

This addition to the existing range is mainly due to the advances achieved by Linden Comansa during the development of the crane with the highest capacity of the LC2100 Series, the 21 LC 750 with 52.9 tons of maximum load. Both cranes share the same double-trolley system, composed of one rear trolley/hook and one front trolley/hook. Both can work separately or together, depending on the load requirements, and change of reeving is automatic.

Also, Linden Comansa has prepared an adaptation kit to upgrade a 21 LC 550 19.8 ton machine that is already on the market to a 21 LC 550 26.4 ton. This transformation will be easy and cost effective for those owners who already have the version of 19.8 tons of maximum load.