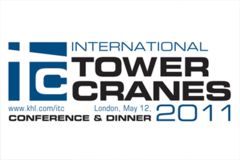 International Tower Cranes 2011 is a new top-level one day conference and networking dinner for tower crane users and manufacturers worldwide. ITC 2011 will be held in central London, UK on 12 May 2011. Organised by KHL Group, publisher of International Cranes and Specialized Transport, the event will be the culmination of extensive consultation and research. It has the backing of the UK’s highly-respected Tower Crane Interest Group, part of the Construction Plant-hire Association.