MUSKEGON HEIGHTS, Mich. The largest employer in the city of Muskegon Heights informed employees Tuesday their jobs will end. 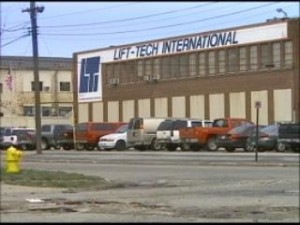 Lift-Tech builds industrial hoists and cranes. The plant could completely close within a year.

Lift-Tech employs around 200 workers, most of whom are union members. The company is owned by Columbus McKinnon from Amherst, New York.

Last year the company reported huge losses and announced it would begin closing some manufacturing facilities.

Elected officials in Muskegon Heights say the announcement will mean the loss of income tax revenues. City leaders were working to offer the company “renaissance zone” status to keep the jobs from leaving.