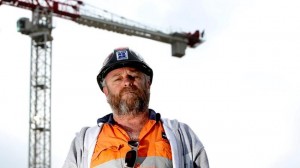 CONSTRUCTION on the state’s biggest building site in 20 years is in turmoil after work was suspended following the third crane accident at the new Royal Adelaide Hospital in three weeks.

Workers walked off the job until at least Monday after the latest incident at the West End site, in which two “hammerhead” tower cranes collided while lifting heavy shutters and frames.

SafeWork SA disclosed that it had launched five separate inquiries on the tower cranes since March – including three in as many weeks this month.

Safety inspectors are investigating whether distance sensors had failed in Thursday’s incident or whether workers were driving the cranes too fast.

It came after crisis meetings between safety inspectors, unions, workers and management. Workers later announced they had walked off the job until Monday at the earliest.

Three of the eight cranes – 1A, 2A, 3A – remain shutdown until further notice as unions described a toxic atmosphere on the North Tce worksite since construction began in June 2011.

Technicians have been brought in from interstate and Italy to examine the cranes.

The safety failures are a major embarrassment for officials behind the $1.85 billion hospital site – the biggest in South Australia since the Myer Centre city redevelopment started in 1989.

The project’s contractor, Hansen Yuncken and Leighton (HYLC), insisted timing surrounding the RAH site was not affected and “the completion date will remain 2016”.

Safework SA executive director Bryan Russell said prohibition notices meant the cranes were “out of service” until an appropriate end to investigations.

“All incidents on construction sites concern us and we are constantly engaged with contractors in regard to safe work practices,” he said.

“This is an ongoing issue but our determination is to ensure that as a landmark construction in this state, it will be delivered safely and safety is our priority.

“We have taken action with respect to unsafe cranes. Those cranes are not allowed to operate until such time as we are satisfied that they are safe to operate.”

All workers must have special licences and all cranes, which are designed to avoid the capital’s flight path, are fitted with senors that slow down the machines under a certain distance.

He warned of serious injury on the site unless safety was addressed.

“Workers have decided they have lost confidence in the contractors … that they can supply a safe workplace,” he said. “The atmosphere has been terrible. Everyone’s heads are down.”

Premier Jay Weatherill said safety on the worksite was of a “paramount importance to this Government, we won’t do anything to compromise that”.

“I’m right behind the workers, if they have concerns about their safety, this Government will stand with them,” he added.

Health Minister Jack Snelling added: “We would expect the consortium to deliver a safe workplace in accordance with the laws of the state. SafeWork SA is undertaking their investigation into the most recent incident and will take whatever action is needed.”

A HYLC spokeswoman said: “We will continue to work through the safety protocols regarding the recent crane incident. All cranes have been shut down and a review is underway.”

Safety inspectors are due to complete their inquiry within weeks.