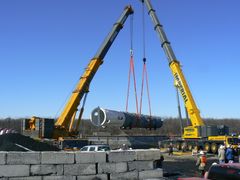 Using 500 US ton Liebherr and 550 US ton Grove all terrain cranes, Imperial Crane Services in the US executed a tandem lift to pick a 102 US ton reactor from a barge. The vessel, lifted from the Chicago Sanitary and Ship Canal barge at the Citgo Refinery, was then transported into the refinery as part of its Ultra-Low Sulfur Diesel (ULSD) project.