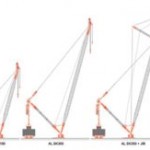 Heavy transport and lifting company ALE based in the UK has been awarded its largest contract to date.

The five-year, multi-million pound project is to build two aircraft carriers for the Royal Navy. HMS Queen Elizabeth and HMS Prince of Wales would be assembled at Rosyth dockyard in Scotland. Components, in the form of sections of the ship known as blocks, built at other UK shipyards, would be transported for assembly at the yard in Fife.