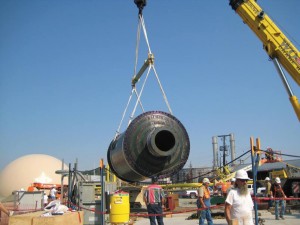 Protect your slings from cuts and abrasion.

Deciding what to use when protecting synthetic slings depends on the application. Speaking on the topic at the North American Crane Bureau’s Professional Development Conference last fall, instructor Steve Romeo asked the audience what types of materials they use. Answers included old cut-up synthetic slings, a fire hose, rubber, plastic PVC pipe, blocks of wood, and cut-up tires. However, according to experts, no matter what protection is selected, it’s imperative to use it correctly to avoid the potential for disaster.

“All slings have limitations,” says Mike Gelskey, president of Lift-It Manufacturing Co., Inc., Los Angeles, Calif. “The limitation for synthetic slings is their susceptibility to damage by abrasion and cutting.” Protecting against wear is his biggest concern.

Another issue is a lack of education. “Some products can be used in certain instances, but may not work in other situations,” says Ray Linton, owner of Linton Rigging Gear Supplies, Sellersburg, Ind., and a member of the board of directors of the Association of Crane & Rigging Professionals (ACRP). “There are products that will work if a person is trained properly and knows what they’re doing.”

According to Gelskey, a load doesn’t have to be razor sharp to do irreparable damage to the sling. Damage can occur anytime tension and compression exist, and you add circumstances where either the load shifts in the sling or the sling skips across the load edge because it wasn’t rigged properly, he says. In those situations, it’s as if no protection was used at all. Mike Riggs of I & I Sling, Knoxville, Tenn., recalls similar incidents: “I know of two accidents where the correct protection was used but put on improperly. They didn’t understand how to use it.” 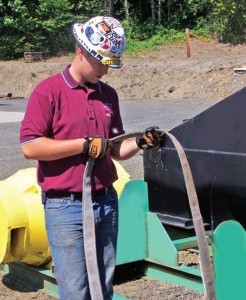 The industry is beginning to recognize the need to change definitions and to increase education. First the Web Sling & Tie Down Association updated its Recommended Standard Specification for Web Slings, WS1. Then ASME B30.9 also addressed the problem. That standard now calls for the use of sling protection. “They finally figured out it doesn’t have to be a sharp edge to kink or cut a sling,” says Linton. He adds that the three main types of damage that synthetic slings must be protected against are cuts, abrasion, and wear, while Riggs puts UV degradation near the top of the list. Linton says selecting the right product is crucial, and that using only one type of edge protection for all situations won’t help.

The differences between cutting and abrasion

Riggs, who currently serves as ACRP president, believes riggers don’t understand the difference between abrasion and cut protection. He finds that usually they’ll choose to use abrasion protection for both situations. Compounding the problem, manufacturers don’t always identify whether their product is made specifically to prevent abrasion or cutting, says Riggs. “Anything designed for cut protection should have a manufacturer’s rating on it, based on testing,” he says. “Even if someone builds a homemade device, which is perfectly fine, they should test it first.”

Gelskey emphasizes that sling manufacturers must explain to users that if there’s “abrasion,” which is two surfaces rubbing against each other, protective measures will be totally different than if you’re protecting an edge of a load over a certain radius.

“If abrasion is a factor, then there are products inherently abrasionresistant, such as bulked nylon, commonly referred to as DuPont’s Cordura,” he says. “It’s four times more abrasion-resistant than conventional nylon or polyester fibers.”

An example Gelskey offers is a situation where uneducated riggers use 1/8-inch thick Cordura as protection in lifting a load that has a 3/8-inch rough-edged protusion. “The uninformed user thinks they’re bulletproof by putting that 1/8-inch thick pad up against it,” says Gelksey.

Whatever protection device you use, test it first with a load on the hook. “Testing is key,” says Riggs. “And you need to test on very sharp edges to prove their worth.” Gelskey says the concept of doing a test lift warrants valuable consideration. Questions to consider during the testing process include:

And buyer’s should beware of companies that have “one sling that does it all.” All slings can be damaged if used improperly or without edge protection.

Sling buyers will be able to communicate with their distributors when specifying slings or ordering products through the use of the following definitions. 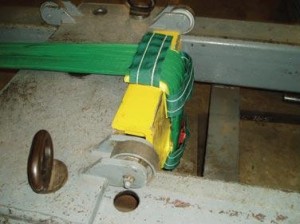 Sleeves: As their name suggests, sleeves are designed to cover the sling with a movable fabric which can be positioned and re-positioned along the sling as needed. For example, Slingmax’s CornerMax Sleeve protects synthetic slings from cutting due to curvature of the load edge or repetitive applications, such as unloading steel coils. 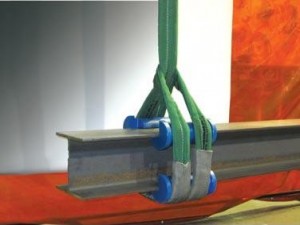 Corner Protectors: Protect the sling and the load. Slingmax’s CornerMax Pad protects the sling from the load edge by creating a tunnel of no contact around the load corners. Linton Rigging Gear Supplies’ Magnetic Sling Protectors are hard nylon protectors which attach to steel corners and plate edge via magnet, and keep the sling from contacting the load. They not only work with synthetics but wire rope chain as well.

This article originally appeared in the March 2011 issue of Industrial Lift and Hoist.