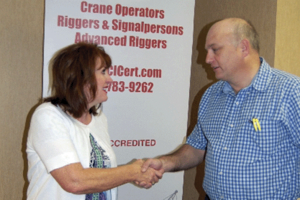 Debbie Dickinson, executive director of CIC, congratulates Tim Edwards on his election to the committee

US-based Crane Institute Certification (CIC) is looking at expanding into Canada with a reciprocal operator certification agreement with BCACS of Vancouver, British Columbia.

Meeting at the CIC Annual Meeting earlier this year, the US certification provider and BCACS are looking to increase certification options for Canadian operators.

This summer, Industrial Training International in Woodland, Wash., and Columbus McKinnon at its Training Centre in Buffalo, New York, will assist with pilot testing for the reciprocal programme.

“The two certification programmes have been reviewed side by side to check for compatibility. Where there are gaps between BCACS’s programme and ours, it’s more of a difference in structure than in content,” said Debbie Dickinson, executive director of CIC.

Both organizations test by type and capacity. BCAC’s operator tests also contain test criteria related to rigging, which can be drawn from CIC’s Rigger and Advanced Rigger programmes.

CIC also made a number of committee elections during its annual meeting, with Tim Edwards, president of Tim Edwards Co., LLC, Campbellsville, Kentucky, elected to the position of public member on the CIC Governing Committee.