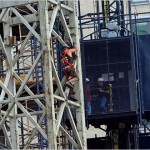 The New York Times has reported that officials in several places, including New York State, New Jersey, Connecticut, California, Ontario and Dallas have expressed interest in a new database for tracking tower cranes or their parts.

The NY Buildings Commissioner described the planned database “a major step toward establishing a standardised system of tracking tower cranes across the country.” The measure follows two recent  tower crane incidents which claimed 9 lives. The system is intended to identify cranes in use in an area with details of the crane owner, make, model, date erected on the site etc.