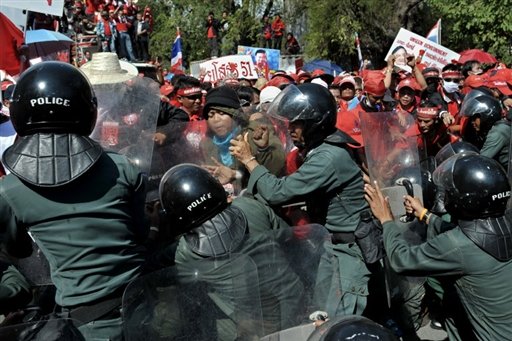 Tens of thousands of protesters surrounded Thai premier Abhisit Vejjajiva’s office Thursday, stepping up efforts to topple him on the day the government launched a cash handout scheme for the poor. When the police set up shipping containers to block the protesters out. They brought out the cranes…

BANGKOK (AFP) — Tens of thousands of protesters surrounded Thai premier Abhisit Vejjajiva’s office Thursday, stepping up efforts to topple him on the day the government launched a cash handout scheme for the poor.

Police said around 35,000 red-shirted supporters of fugitive former premier Thaksin Shinawatra had started arriving at Government House in downtown Bangkok to press their demands for Abhisit to call snap elections.

Chanting “Get out! Get out!”, the demonstrators used huge cranes to remove shipping containers that police had used to block off roads leading to the sprawling complex.

“Today we have only one aim, to oust this government,” protest leader Jatuporn Prompan said, adding that the demonstrators planned to stay for several days.

Thaksin — who was ousted in a 2006 coup and is living in exile to avoid a two-year jail sentence for corruption — would address the protesters by videolink on Friday, said another protest leader, Nattawut Saikuar.

The protest began hours after Abhisit doled out the first of around 10 million “gift cheques” of 57 dollars to low-income earners as part of an economic stimulus package, a move denounced by critics as vote-buying.

Nattawut told the crowd from a stage set up outside Government House that two protesters had cashed their cheques and donated them to the “Red Shirts”. There was no way of independently verifying the claim.

“They did not think these cheques were useful for solving economic problems so they donated them,” he said.

Abhisit himself ruled out imposing a state of emergency — a measure used by two Thaksin-backed prime ministers last year when protesters seized control of Government House and Bangkok’s two airports.

“I am confident that the government will not have to declare a state of emergency, but whatever happens we are ready to cope,” he told reporters earlier at Government House.

The British-born leader said he had given instructions for police and soldiers to be “extra patient because there are expected provocations.”

Around 6,000 soldiers and more than 2,000 police were guarding Government House while authorities had placed barbed wire atop the fences of the building, officials said.

The protest was one of the biggest of several held by Thaksin loyalists since Abhisit came to power in December following the controversial dissolution of the previous, pro-Thaksin government by a court.

Thursday’s demonstration came just days after Abhisit easily saw off a no-confidence vote called by the opposition over allegations of corruption.

Abhisit’s opponents also accuse him of being a puppet of Thailand’s powerful army, which led the ouster of Thaksin nearly three years ago following months of protests by the royalist People’s Alliance for Democracy (PAD).

The yellow-clad PAD took to the streets again in early 2008 after Thaksin’s allies won the first post-coup elections, launching a campaign that peaked in the siege of the capital’s airports in late November to early December.

Backed by elements in the palace, military and bureaucracy who resented Thaksin’s influence, the PAD only lifted the blockade after a court dissolved the previous government led by Thaksin’s brother-in-law.

Thailand remains deeply polarized by the legacy of Thaksin, a charismatic billionaire who wooed the rural poor with populist schemes but was accused of graft and authoritarianism.

The economy is also on the verge of recession, and deputy prime minister Korbsak Sabhavasu said that the government’s economic strategies targeting the poor, especially in the countryside, would help curb unrest.

“This is a good thing the government’s doing so the political unrest will be minimised,” Korbsak said.