The managing director of a failed construction company has been fined £80,000 plus £18,495 costs following the death of an employee caused by a crane overturning while overloaded.

Benjamin Lee, 36 of Preston, the managing director of Siteweld Construction, which has since ceased trading, pleaded guilty to breaching the Lifting Operations and Lifting Equipment Regulations 1998 (LOLER).

Mark Thornton, 46, died when a 50 tonne All-Terrain crane, owned and operated by Bryn Thomas crane hire, overturned while lifting a steel column for a warehouse extension at Wavertree Business Park on 29th March 2007. 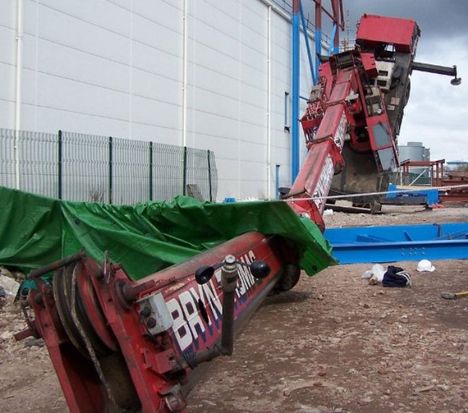 Siteweld Construction and Lee, along with Bryn Thomas Crane hire and the operator, Frederick Scott, were prosecuted by the Health & Safety Executive for failing to make sure the work was planned and carried out safely. Liverpool Crown Court heard the crane had attempted to lift the six tonne column at a radius of almost 18 metres, well outside the crane’s load chart.

The HSE investigation found the crane had not been properly maintained and the external alarm could not be heard by those working nearby. The load moment limiter override switches were also faulty.

Siteweld Construction, pleaded guilty to the same offence and received a nominal fine of £50 with no costs since it has ceased trading.

They put the company into administration back in January and then resumed their business virtually the next day with most of the same cranes and the same trading name. click here to see low fines in fatal crane incident

Sarah Wadham, the investigating inspector at HSE, said: “It is tragic that Mr Thornton died because a series of health and safety warnings and procedures were ignored. The crane was simply not capable of lifting the steel column, when it was nearly 18 metres away, without it being overloaded.

“If the work had been properly planned, and the crane had been properly maintained, then Mr Thornton would still be alive today. It is vital construction companies learn from this case to prevent similar deaths in the future.”

While we do not always agree with blame being automatically pushed onto a company or its management when an accident is caused by something that was caused by decisions made by adults on site this is a case where examples needed to be made of those in charge. We do have to wonder though why the Thomas family has not yet been fined, given that the crane was found to be poorly maintained and critical equipment was malfunctioning.

Whether the right man has been penalised in this case or not we do not know, nor are we likely to. While this case has apportioned some blame, even after the two companies implicated bailed out, it has not, as far as we can see got to the core of the matter.

Six tonnes at 18 metres is up to a one tonne overload or two metres out of radius for many three axle 50 tonners – so whose idea was it to overload the crane? Was it the operator on his own? Possibly but unlikely. Was it the site foreman/manager? Did he put the crane operator under pressure to do the lift even though it was too much for the crane?

Was it purely down to an indicator malfunction? If so why did the operator not stop the lift? If the device was not functioning properly when did this start?

It is possible that all or some of this came out in court? But this sort of information ought to be out there in the public domain – broadcast widely as a case study by the HSE.

Yes, issuing a director with a fine will send a strong message to directors of those construction companies whose site managers every day of the week continue to put crane operators under pressure to push their cranes to the limit. However the typical reaction tends to be more covering of the backside than truly addressing the problem.

While it might be unpopular we believe that the crane operator ought to take more responsibility, just as a commercial aircraft pilot. Operating a modern crane should be seen as a highly skilled and professional job and the operator should always have the final say. An anonymous hot-line to the regulatory authorities to report any site managers or job sites that apply pressure to crane operators or owners might also be a useful tool to help change the mentality of some site managers?