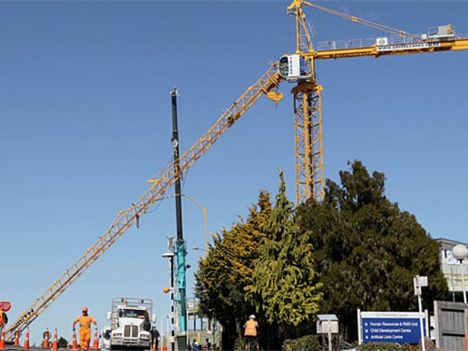 A tower crane jib came down across a street in Hamilton, New Zealand on Friday while a crew was dismantling it.

The 20 metre high Potain crane, had been working on the construction of a car park. A mobile crane from Waikato cranes was preparing to remove the jib when something went wrong and the jib fell into Pembroke Street. It was still attached to the tower, but the pendants clearly were not. We do not know if its slings that gave way or the erectors made a mistake in the sequence of dismantling?

Thankfully no one was injured and the damage was limited to the crane itself.