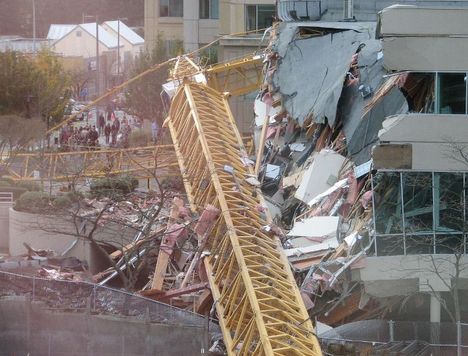 The operator of the tower crane that collapsed in Bellevue in November 2006 has been awarded $1.45 million.

Yeakey was awarded $1.15 million in economic damages plus $300,000 in non-economic damages, including pain and suffering, and loss of enjoyment of life. In addition, the jury awarded his wife, Kristina Yeakey, $55,000 in non-economic damages.  The verdict, which placed 70 percent of the blame on MKA, was the first time a jury has found negligence in the fatal collapse took the life of Matthew Ammon, as he sat in his apartment opposite. His family settled out of court for an undisclosed sum without finding fault.

The couple was disappointed with the award, as it was far less than the $12 million that they had sought.

Yeakey, 39, has apparently been found 100 percent disabled by the state department of labor & industries, although he initially returned to work on light duties. His wife says that she is also unable to work as she has to care for him.

The couple claim that the award will not cover lost pay and medical bills and will reduce his disability payments.

Investigators determined the collapse was caused by the flawed engineering design of the crane’s base. Both Lease Crutcher Lewis and MKA were then fined for the improper design and construction of the crane. The citation against MKA was later dismissed on appeal.