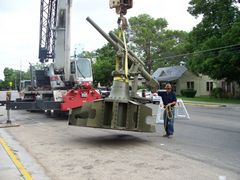 These are among the feelings one experiences when viewing the exhibits at the newly expanded George H. W. Bush Gallery at the National Museum of the Pacific War in Fredericksburg, TX.

Fittingly, the museum will officially open the newly expanded gallery on December 7, 2009, 68 years after the attack on Pearl Harbor. President George H.W. Bush and Commandant of the Marine Corps General James T. Conway will be the honored guests at the re-opening ceremony.

You’re halfway home! Or are you?