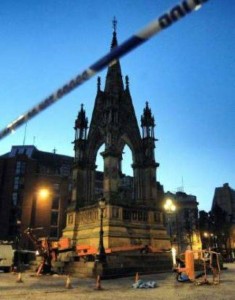 A company director has been ordered to pay £20,000 over the death of his best friend after an access platform toppled over in Manchester city centre in 2007. John Taylor, 65, admitted failing to ensure the safety of his long-serving employee Ian Gutteridge, 56, when they used the platform to reach the top of the Prince Albert monument in Albert Square. They were fitting a neon necklace to the 140-year-old statue.