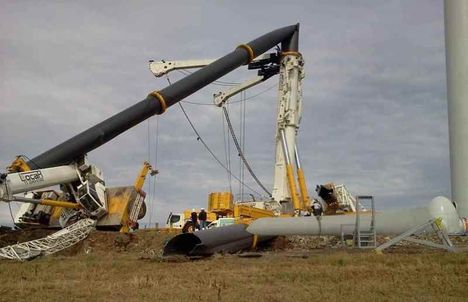 We have been alerted to a tragic crane accident on a wind farm in South America, almost certainly in Brazil.

The accident, which we have been told occurred last wednesday, involves a 1,200 tonne Liebherr LTM11200-9.1. which was lifting a full blade and rotor assembly into place when – we are told – a strong gust took the load out to the side, creating a massive side load on the crane’s boom.

The crane was working with luffing jib and Y-Guy boom support, the stresses were such that the boom buckled and broke with the boom nose and jib base coming down on the operators cab.

The crane is owned by Brazil’s largest crane rental company Locar. We have contacted the company for a comment and will update this item as soon as we are able.

We are told that there was a fatality on site, almost certainly that of the operator, whose cab was wiped out by the falling boom and jib.