Three workers were killed after a crane collapsed at a construction site in northwest China’s Gansu province on Saturday, local authorities said. 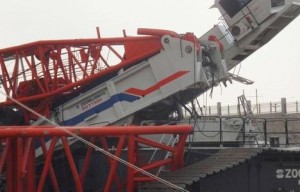 The accident happened at 10:45 a.m., when workers were dismantling a tower crane in a residential community in the city of Linxia, according to the provincial administration of work safety.

The administration said one of the crane’s arms broke off and fell to the ground, crushing three workers. Two died at the scene, while the third perished after being sent to a local hospital.

An investigation into the cause of the accident is under way.