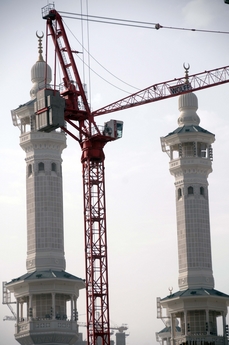 Wolffkran has supplied 44 cranes for the construction of 1,000,000 sq m of accommodation for pilgrims to the Islamic holy city of Mecca, Saudi Arabia.

Millions of Muslims travel to the city to observe Hajj every year, and as a result Mecca has been subject to significant expansion over the last few years.

The accommodation complex, under construction since 2004, is part of major development works in the city, which also includes the erection of the 600m tall Mecca Royal Clock Tower, expected to become the second largest skyscraper in the world after the Burj Khalifa.

Mecca’s Great Mosque of al-Haram is home to what Muslims consider the holiest shrine in Islam, the Kaaba, meaning that non-Muslims are not permitted to enter the holy site.

As a result Wolffkran, along with its sales partner in the region Roots Group, conducted several training sessions focused on the assembly and disassembly of Wolffkran tower cranes.

In addition some cranes were pre-assembled before transport to the holy site, something Wolffkran believes was simplified by the low individual piece weight of the firm’s luffing jib crane components.

In total, 44 Wolffkran cranes are expected to remain on site until May 2012.

New terminal on the River Weser